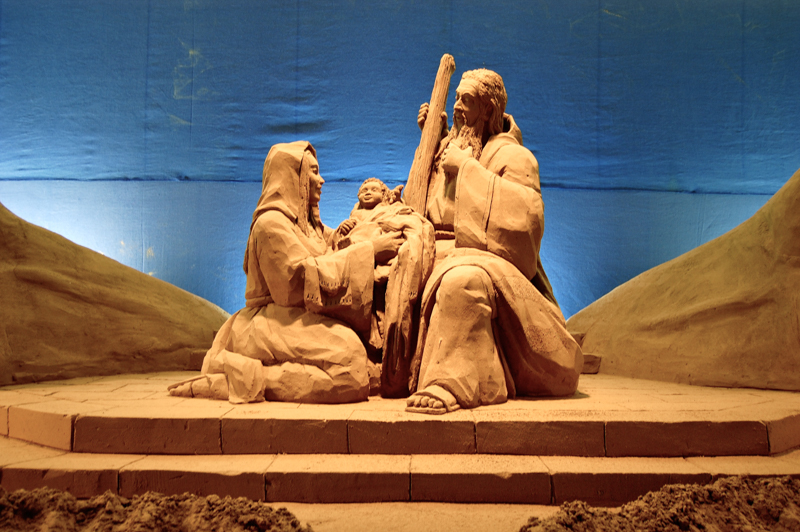 How was the Nativity of Lignano born?

Young social reality (his story of a town invented for tourism is little more than a century long) and therefore heterogeneous, Lignano becomes during the summer the most populated and lively city of Friuli and then fall back, in winter, in a feeling of solitude and emptiness, dilated by the surreal architecture of the city, suddenly become silent and empty.

Hence the commitment of the voluntary association Lignano in Fiore Onlus to ensure that their fellow “winter” citizens could recognize themselves in a community project able to last even beyond the “artificial time of vacation” (and economic activities), giving continuity and extending the aggregating function of the festival at Hemingway Park, promoted for the first time by the association since May 1987.

It was thought that Christmas, a symbol of recollection, reflection, sharing and renewed life could act as a catalyst for a new collective sensibility. From this intuition – and from the generous competition of Comune, Società d’Area and the dense network of local volunteers – the generative nucleus of Natale d’a…mare, that over the years has been able to revive Lignano from its winter torpor, especially thanks to the symbolic charge of a sand nativity also became an authentic expression of those values of peace and universality in tune with the vocation of welcome and hospitality of the seaside town.

The first, timid Christmas symbol in a still indifferent reality, was the small crib artistically carved in wood of Val Gardena, that Lignano in Fiore gave to the City for Christmas of 2000, placing it in the center of the roundabout of Piazza Fontana. But that wooden crib was not yet the crib of Lignano: it did not express the essence of its territory. It was then thought to a crib made only and exclusively with sand and sea water, constitutive elements and characterizing the Lignano peninsula.

A crib and a community

Like Lignano in Fiore, the Sand Nativity was born in the name of spontaneous commitment and poverty. It began in Christmas 2004 and then in the next one with two meager Nativities limited to the essential figures, almost one-dimensional because just thrown on a fragile sandy bottom, which were placed in direct contact with the asphalt in a rather battered sheet metal structure, masked at best with a blue veil. The humidity required to hold the sculptures was guaranteed twice a day by the intervention of volunteers who sprayed water in the container spraying the crib by means of a rudimentary sulfate pump. And… how many sufferings of mind at the daily opening of the box, when the exhausted sculptures and now close to collapse on themselves for lack of natural glue, seemed almost to implore the humidity necessary for their cohesion. And then blossom again in life-giving contact with water!

The calamitous effect of the crib, combined with the suggestion of the incredible winter sunsets on the sea, completed the miracle: thus began, after that summer, the second season of Lignano. Natale d’a…mare began to attract more and more visitors, warmly welcomed by Lignano in Fiore and the volunteers of the vast and generous family of local associations.

Christmas 2006 marked a radical leap in quality: the crib abandoned the container of sheet metal to move into a tensile structure of over 250 square meters, placed directly on the beach from which it could naturally filter the humidity necessary to maintain the cohesion of the sculptures. It then passed from the few initial palates, to over 500 tons of sand treated and shaped in over a month of continuous commitment by 5/6 sculptors, chosen among the most qualified in the world of sand artists.

And the transformation was immediately evident in the incredible fascination aroused by the Sand Nativity 2006, set in the world suspended between land and sea of the lagoon of Marano, among houses, sandbanks, reeds, flat-bottomed “batele”, nets stretched to mend or emerging from the water and loaded with fish meticulously represented in their phantasmagoric variety. And then… expanses of water lilies, ireos, ferns on which trajectories of birds seemed to trace their happy flights. The Nativity was particularly striking in a typical Marano lagoon architecture, characterized by the square shape of the traditional Venetian fireplace.

Still remains memory of some (unforgettable) Nativity, among the best achieved under the artistic aspect. For example, that of Christmas 2009: two huge bare hands opened to offer the gift of the Messiah, tenderly welcomed and pampered by Joseph and Mary, whose sweet face evoked images of Botticelli. And again that of 2011, placed in a fragile fishing boat (the cradle was the rough wooden crate, where the catch is collected), symbol of the uncertainty and precariousness of children who are born in the indifference and selfishness of those who remain firmly anchored to the earth (symbol of money and power).

In the Nativity of the “forgiveness” of Christmas 2013, the huge and wide open wings of an angel became a hut to welcome Mary, Joseph and the Child to embrace that humanity that the sculptures had crystallized in the gestures of evil represented in the figurative “Seven deadly sins” (theme of the Crib), then regenerated in grace from the birth of the Child Jesus.

Year after year, Lignano in Fiore has continued to propose the challenge-torment of Eduardo De Filippo in the theatrical classic Christmas in Casa Cuppiello: «Te piace ‘o presepe»? And with the same stubborn stubbornness of that protagonist has worked and reasoned long in the different editions that have followed.

The secret of the timeless charm and beauty of the crib lies precisely in the delicate balance between the forms of tradition and the variants, which propose it «different every year, and all the same years». A beauty never an end in itself but, expression of ethical values that generate and are transformed – as in the case of the crib of Lignano – in concrete actions of solidarity. Without this ideal charge, even the most beautiful sand sculptures become melancholy imitation of a Gardaland of the ephemeral, poor of soul and sense.

Just the opposite of what thousands of visitors have been asking for every Christmas at the crib: beauty and meaning. As witnessed by the branches of the Yule tree folded under the weight of greeting cards left hanging by crowds of people. Notes that speak of hopes, expectations, dreams, but invoke above all health, work, health, love, serenity, peace. A silent chorus of women, men, children, whose perhaps the beauty of the sea and the intense narrations of the crib open their hearts to hope or help to free pain, worries, fears…

Millions of grains of sand … and solidarity

The Sand Nativity of Lignano over the years has allowed to make concrete gestures of help in situations of difficulty or in support of solidarity projects of associations or bodies in the territory, in Italy and in the world. Like so many, tiny grains of sand have contributed to the construction of beautiful artistic depictions, so small but significant offerings of thousands of visitors, being able to make a remarkable critical mass, have made bloom hope, relief and beauty for so many people and in so many places. With particular sensitivity to Italian children and some communities in Africa. Other resources have been aimed at supporting the research and treatment of childhood neoplasms at the Burlo Garofolo Hospital in Trieste and the town of Amatrice hit by the earthquake.

With the passing of the editions, and with the same amazement of the organizers, the number of visitors amounted to more than 70,000 units. This is undoubtedly due to the skill of the artists who know how to extract from the water and sand real sculptures capable of an authentic formal poetry and perhaps also of the themes that from the 2016 edition have abandoned the traditional settings to cross the current and stimulate moments of reflection on important ethical, civil, ecological and historical issues (earthquake, exodus in the centenary of the First World War, migration…). Finally, in 2019, the extraordinary – and much admired – sand translation of some passages of the biblical book of Genesis.

In 2014 from a “rib” of Lignano in Fiore was born a new cultural association, whose name deliberately smiling and light as sand: Dome Aghe and Savalon d’Aur («Only water and sand», answer to the question-catchphrase of visitors: «But what is the crib made of?»). Made up of Lignanese fans and lovers of the magic of the Sand Nativity, the association is aimed at enhancing at all levels, the culture of art linked to the creation of works with the use of sand, as an identifying and fundamental element of the city of Lignano Sabbiadoro.